“The Distinguished-Service Cross is the second highest military award that can be given to a member of the United States Army, for extreme gallantry and risk of life in actual combat with an armed enemy force.” Wikipedia, The Free Encyclopedia.

Lt. Noorlander was wounded in this action (July 31, 1943). He received the Purple Heart, as well as the Distinguished-Service Cross, “for extraordinary heroism while repulsing Japanese attempts to break through his battalion’s defenses on New Georgia, Solomon Islands.” Read the details in the army document to the right. 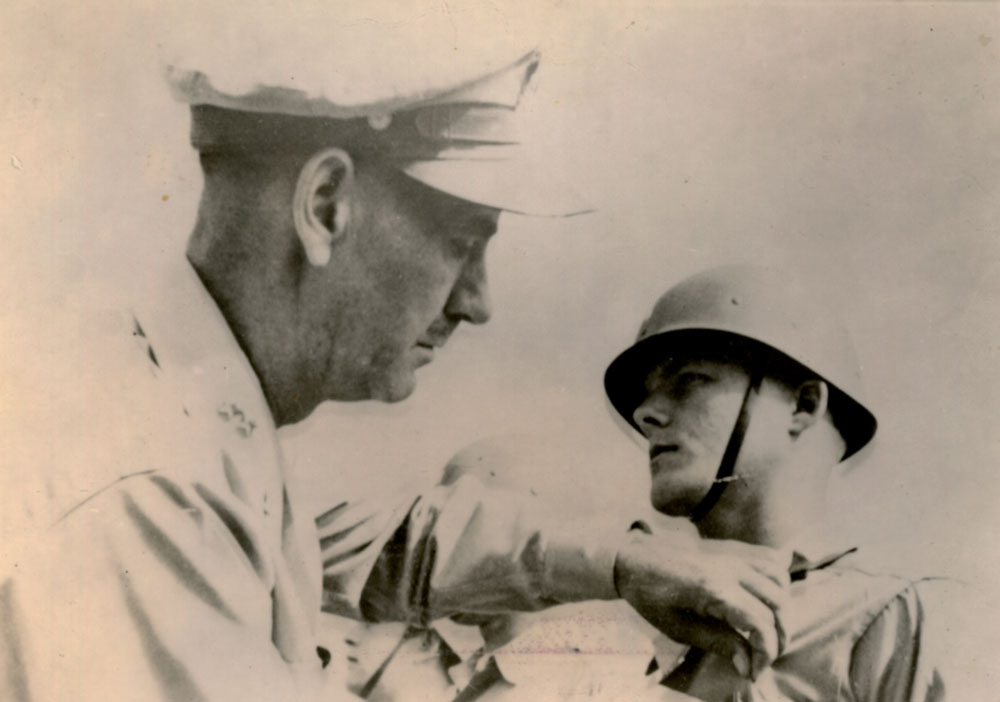 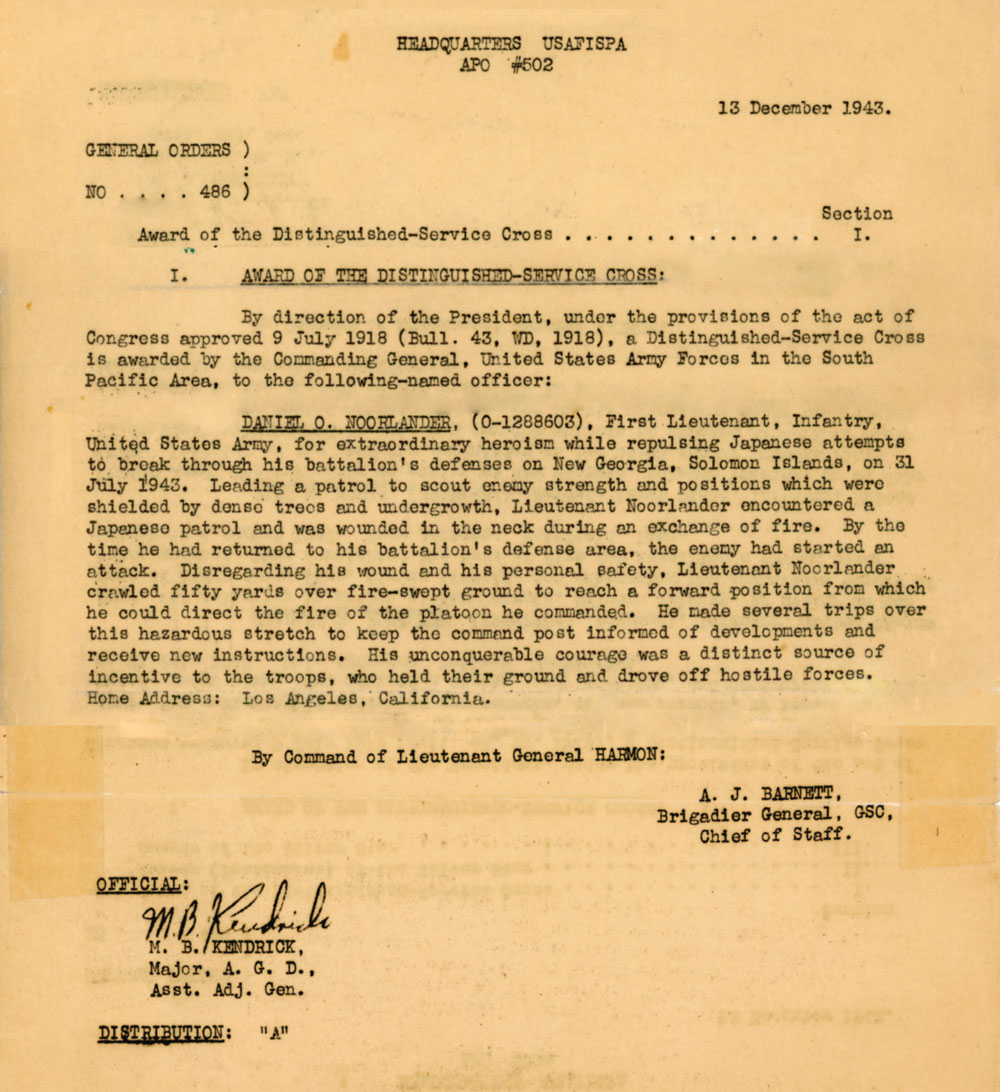 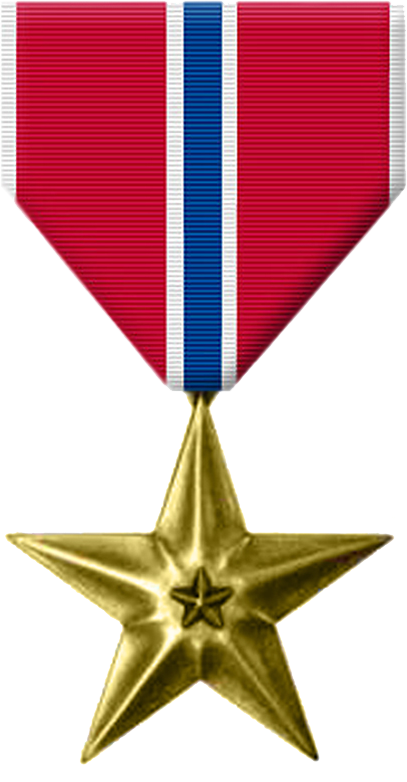 The story behind the Bronze Star is told by Dan on this site under Korea and in the book, Korea and Vietnam: Saints At War by Robert C. Freeman and Dennis A. Wright. It seems there is a reason Dan is smiling in these pictures along with everyone else. 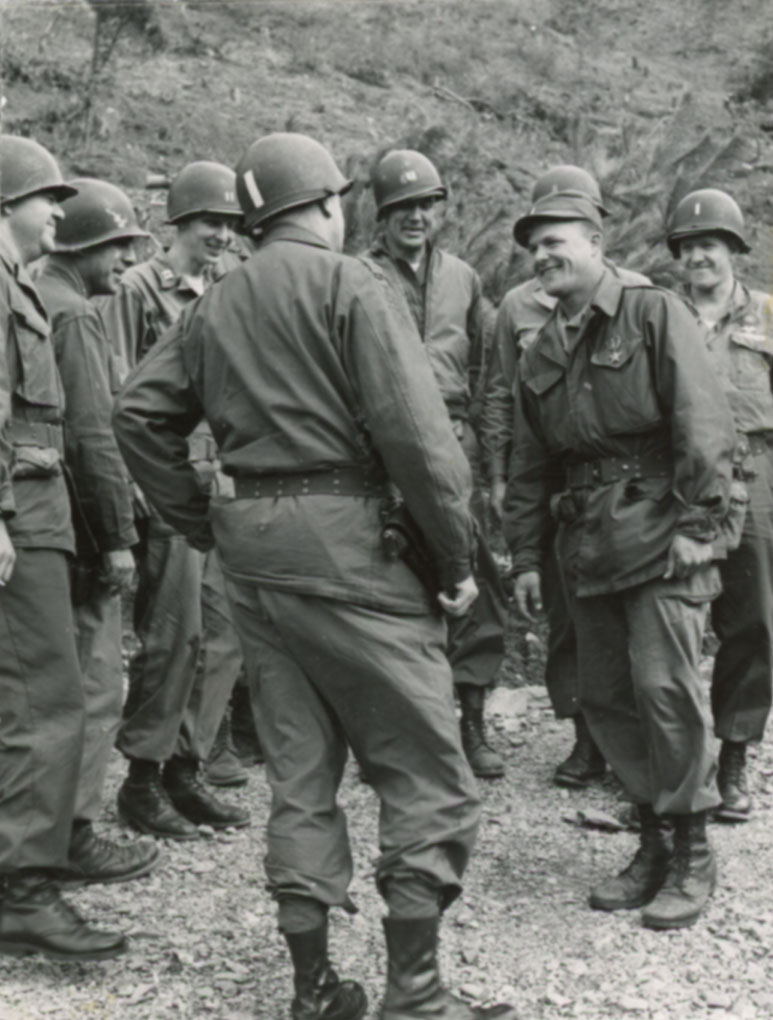 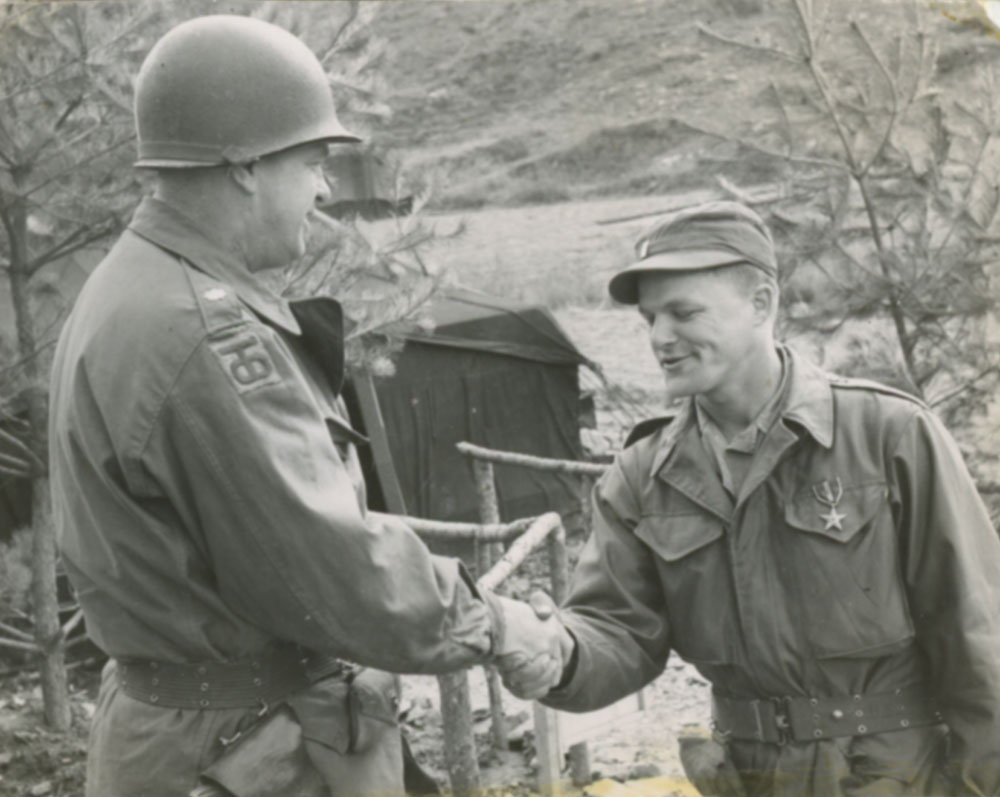 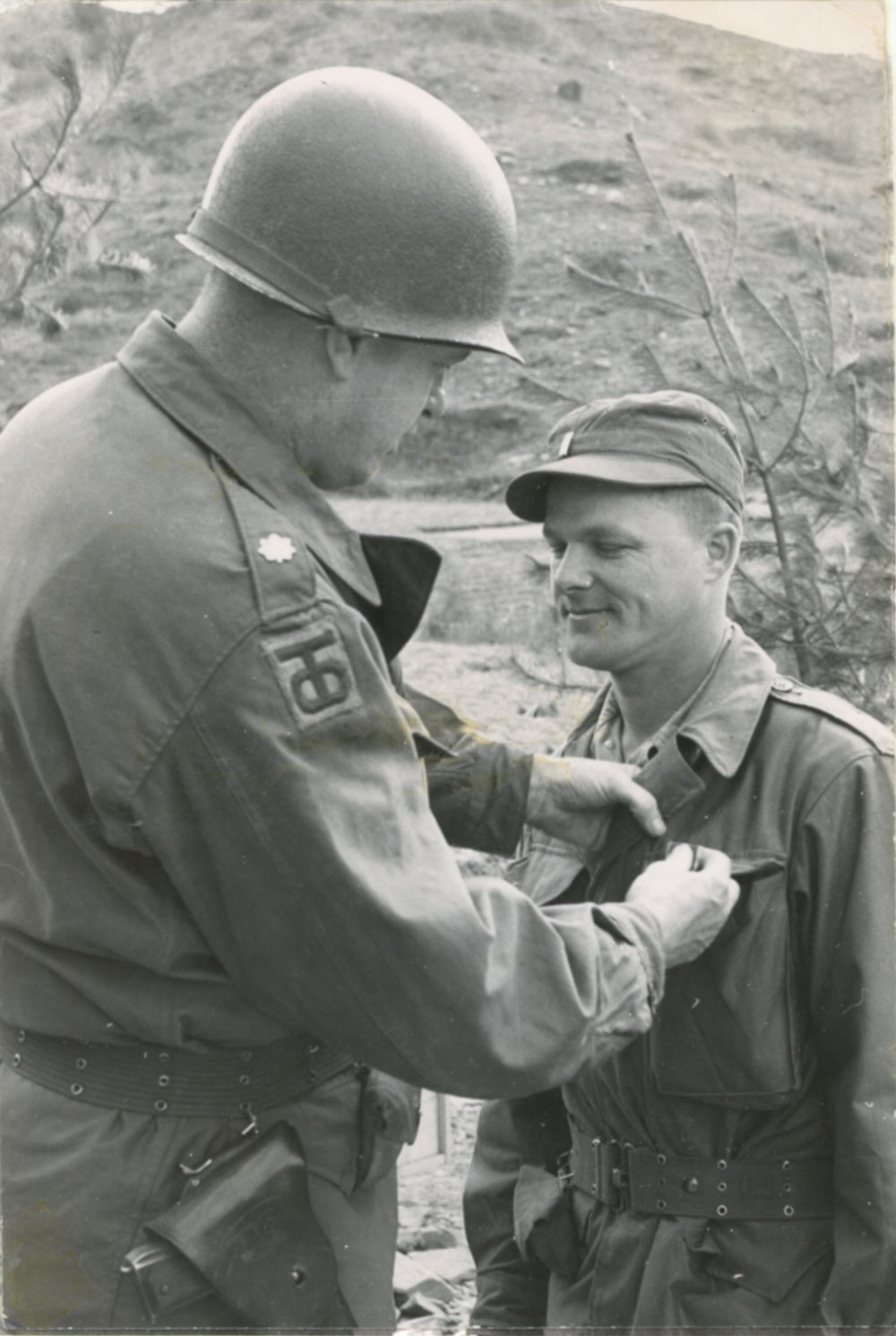 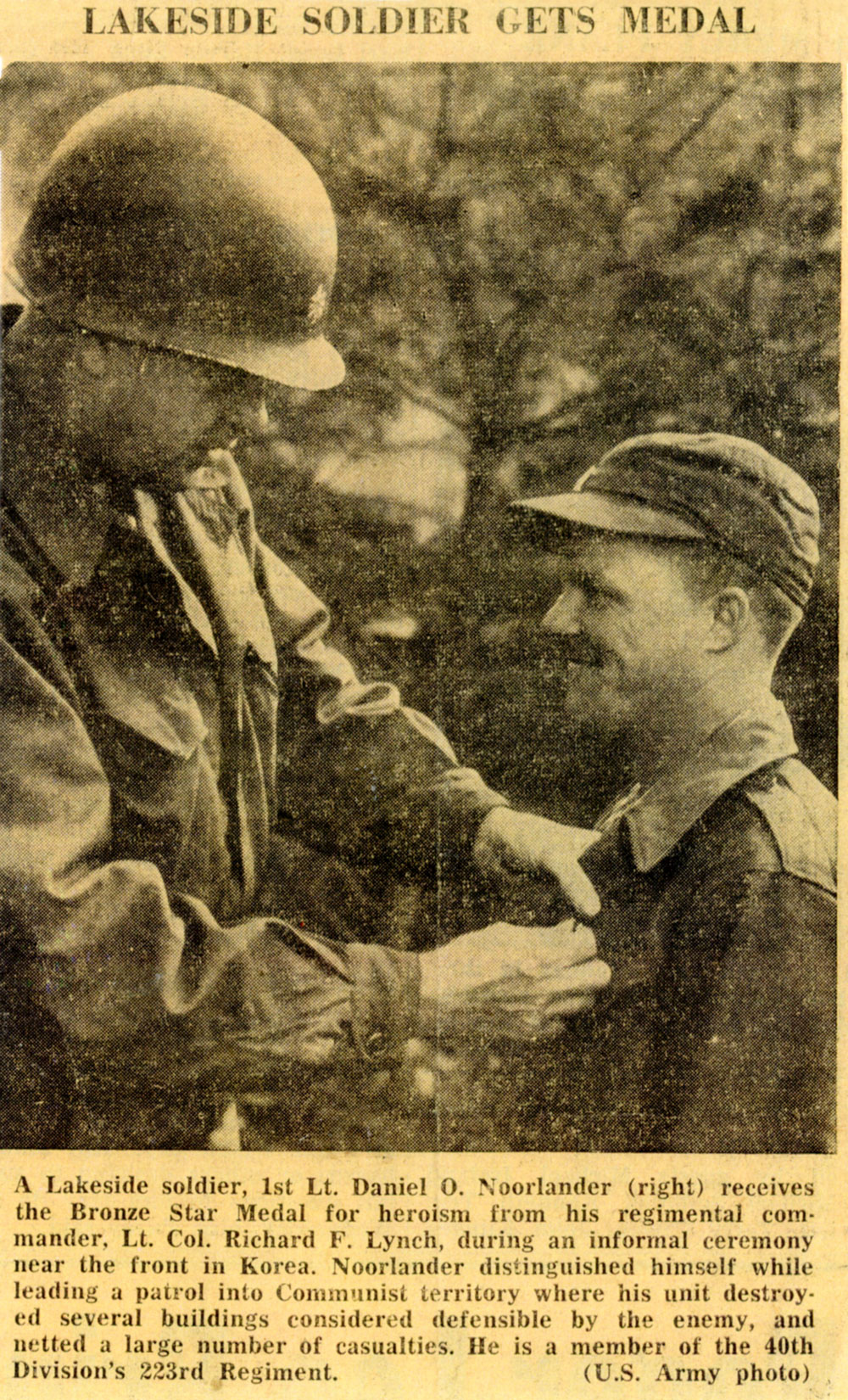 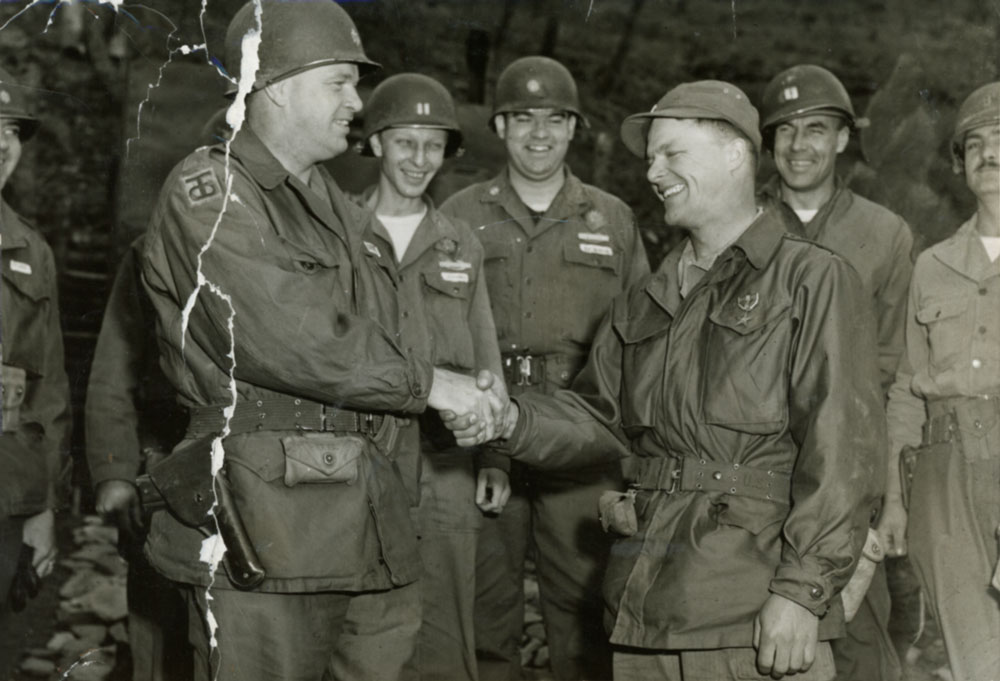 Story from The Infantry Journal

On the night of July 30, 1943, a week after the New Georgia campaign had begun, the 1st Batallion, 161st Infantry was attacked by the Japs during a tropical drizzle. The Japs sent up hissing flares to light their way and attacked in the blinding glare of the flares with tracer bullets sniping and wild yelling and screaming. The effect on our troops was mostly psychological.

The next morning the Japs again counterattacked. The thick underbrush and damp grounds gave them a chance to crawl in close, unseen and unheard, where they could use grenades and knee mortars. The protecing machine gun on the battalion’s right flank was knocked out and several men were picked off when they left their foxholes to get more ammunition.

A mortar barrage was requested to clear a line of fire, but it could not be furnished because of the uncertainty of the location of the 148th Infantry which was somewhere on the right flank. The battalion had no contact with the 148th, but was in contact with the 145th Infantry on the left. The 145th gave the battalion its direction with a belch of black smoke from a flame thrower. The exact location was determined by taking the azimuth of the smoke.

From the general direction of the 148th mortar fire began to come dangerously close to the battalion, and First Lieutenant Daniel O. Noorlander, a platoon leader of Company A set out with two men to ask the 148th to withhold the fire. The lieutenant and his men soon sighted some men clothed in herringbone twill and steel helmets of the U.S. Army. The faces could not be seen. Lieutenant Noorlander whistled softly. His answer was a toothy Jap grin and rifle fire. The american returned the greeting with M1 bullets.

Lieutenant Noorlander received a neck wound which didn’t bother him much until several hours later (infection sets in fast in the jungle) when his neck and shoulders began to stiffen. The group returned with the information that the 148th was farther away than had been thought and that the Japs had slipped through the space between the two units, and had captured some of our clothing and weapons. The fire was evidently from Jap rifle grenades.

A segment of the battalion’s defense perimeter had been weakened during the Jap counterattacks, but disregarding his wound, Lieutenant Noorlander crawled nearly fifty yards to a forward position over fire-swept ground to direct the actions of the two platoons he was leading and to keep the command post informed. First he directed rearrangement of the troops so as to tighten the perimeter.

Lieutenant Noorlander’s courage provided a distinct incentive to his troops and subsequently the Jap counterattack was repulsed—mainly with BARs and machine guns.

Lieutenant Noorlander was awarded the Disginguished-Service Cross for his heroism. 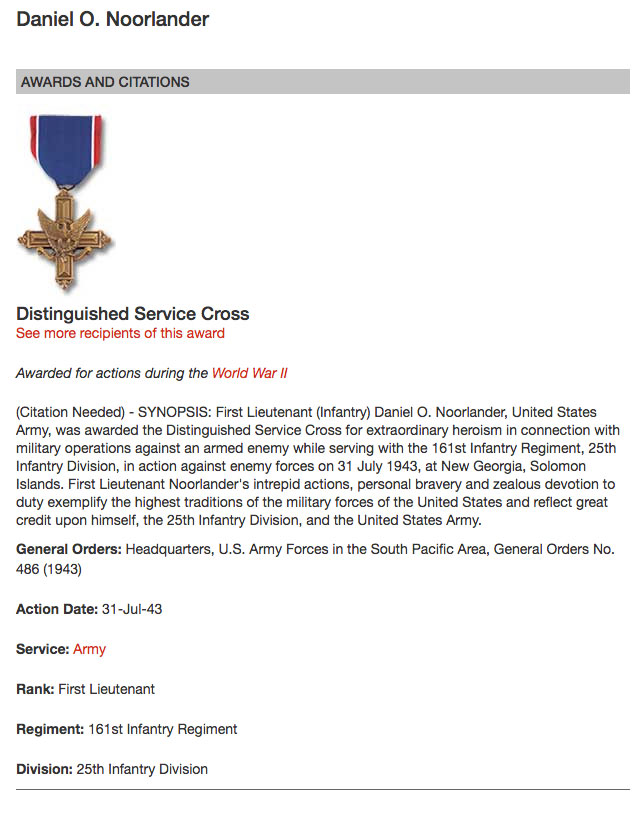 Disp: Evacuated to the next higher medical echelon. 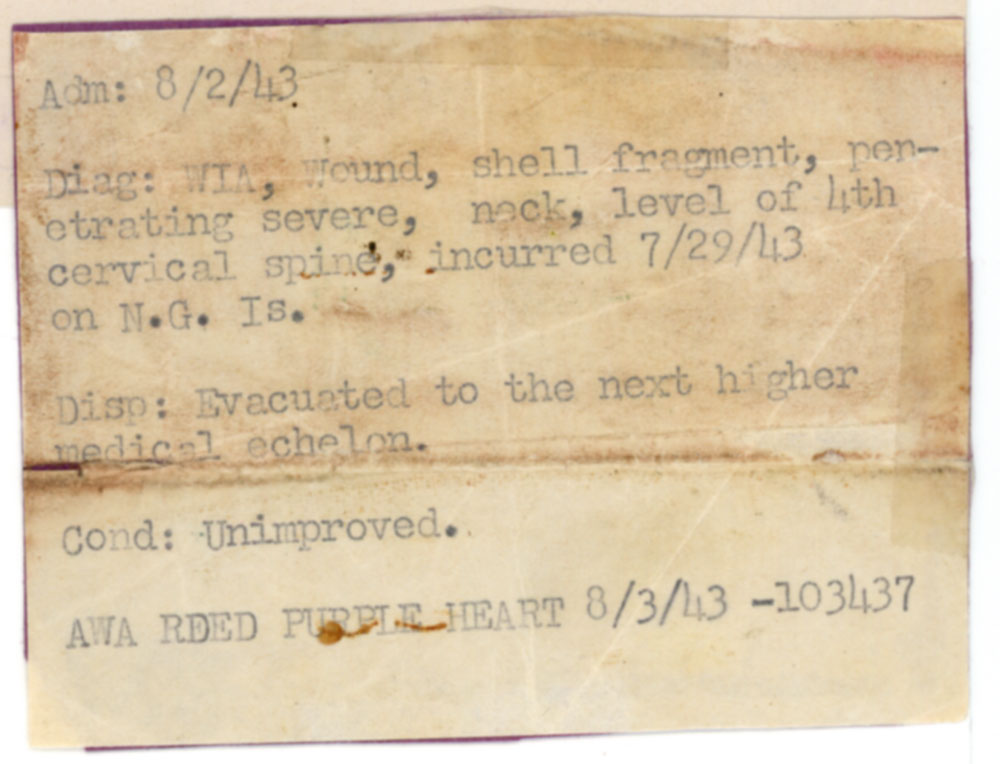 Leading a patrol to scout enemy strength and positions, which were shielded, by dense trees and undergrowth, Lieutenant Noorlander encountered a Japanese patrol and was wounded in the neck during an exchange of fire. By the time he had returned to his battalion’s defense area, the enemy had started an attack.

Disregarding his wound and his personal safety, Lieutenant Noorlander crawled fifty yards over fire-swept ground to reach a forward position from which he could direct the fire of the platoon he commanded. He made several trips over this hazardous stretch to keep the command post informed of developments and receive new instructions.

His unconquerable courage was a distinct source of incentive to the troops, who held their ground and drove off hostile forces. 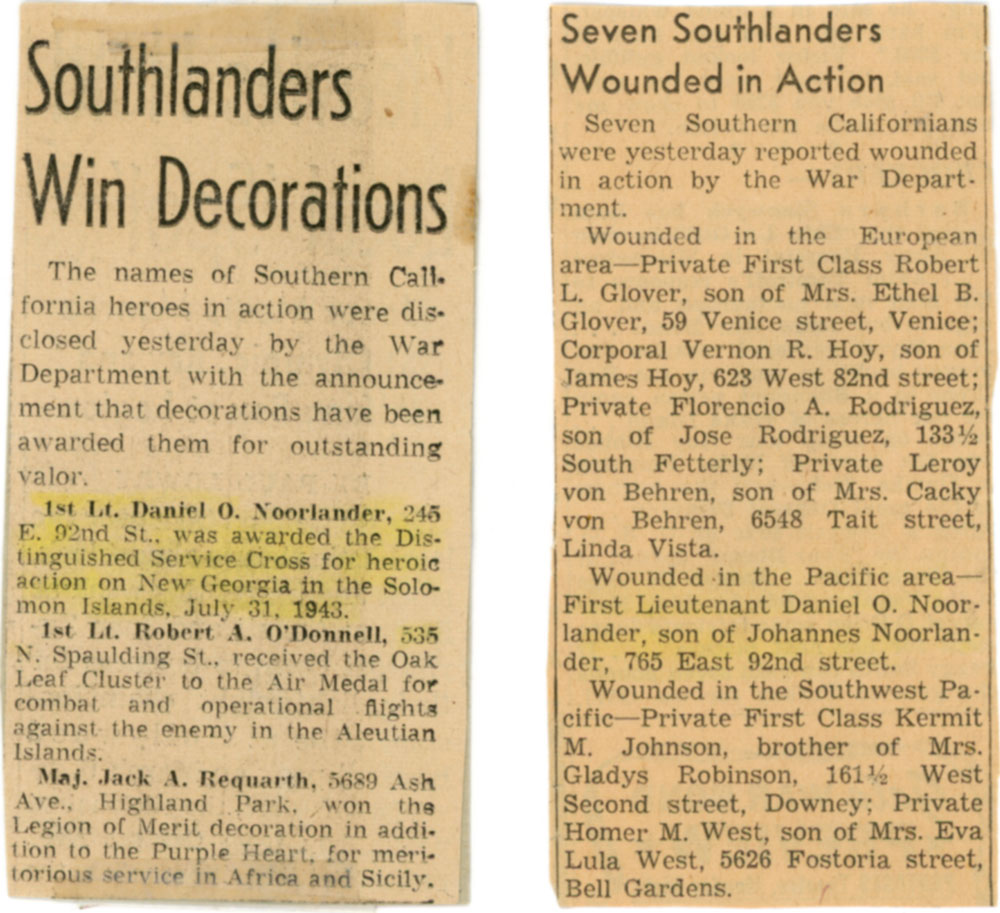